I hosted Iggy Azalea’s show at S.O.B.’s the past Thursday night. As I arrived to the venue and saw a line of fans (known as “Azaleans”) extended around the corner patiently waiting for their queen, I couldn’t help but get teary-eyed. Once I saw Iggy downstairs at the venue to give her a pep talk before the show, it was full-on waterworks for both of us (we tend to wear our emotions on our sleeves, us Aussies). It’s been a rough couple months for Iggy, a young woman from a tiny country town Down Under, including unnecessary drama surrounding her label situation plus mudslinging from fellow artists and more. On a much brighter note she’s officially signed with Wilhelmina Models, is working with some major social media business titans on her upcoming album project (more on that later) and has the full support of T.I. and his Grand Hustle crew. None of any this mattered, however, when she hit that stage to the chants of her adoring fans, many crying earnestly over her incredible success just as she had done moments before.

Get The Look: BOSS LADY Joins Forces With Blend Showroom 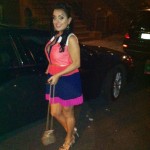